Why tourists still have a passion for Paris 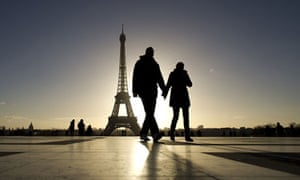 Tourists in Paris walk past the Eiffel Tower. Photograph: Lionel Bonaventure/AFP/Getty Image
Boris is going to choke on his crumpet. Figures published this week show that France has retained its status as the world’s top tourist
destination, with 83 million foreign visitors in 2012, and Paris
remains the most visited city in the world with 33 million tourists a
year, half of which were foreign visitors. This, of course, means a
massive influx of revenues, estimated by the French government’s tourism
arm, DGCIS, at £31bn for 2012.
As years go by, with France and its capital doggedly staying at the
top of tourism charts, observers cannot refrain from expressing
bewilderment. After all, Paris is no more the cultural capital that it
was in the 1900s, the 1920s
or even just after the war when it briefly regained its intellectual
supremacy between 1944 and 1954. It is no more the beacon of
civilisation. By comparison, cities like London, Berlin, Shanghai,
Buenos Aires and a good other dozen feel more vibrant, modern and
exciting. So why is Paris staying at the top?

The stories you need to read, in one handy email

The idea of Paris – passion, blood, violence, moral
ambiguity, heroism, cowardice, dazzling minds, mesmerising motion
pictures, architectural audacity, style as ethos – is one of the most
potent there has been in modern history. It is what drives throngs of
people to its river banks. Thousands of authors regularly tackle this
subject, and books about Paris will probably line bookshelves for
decades to come. Paris
is powerful, a precipitate of humanity and civilisation. It deals all
at once with revolution and the birth of modern democracy.The reality may of course disappoint many elevated visitors – it’s bound to – and some Japanese tourists, suffering from the “Paris Syndrome”,
must be repatriated every year, shocked as they are at the difference
between what they dreamt and what they found. However, the majority of
visitors still find here and there traces of what they sought, and keep
coming back.
In comparison, the experience of London is starkly different.
Expectations are not necessarily high, and the city’s image is certainly
blurred. There has been too much cacophony in its making to offer one
coherent idea to the world. So the reality of London is proportionally much more alluring than the idea we might have conceived of it.
Today though, the affluent Chinese bourgeoisie is in love with Paris as with no other city. Due to Britain’s visa restrictions and high costs, they have simply struck off London from their European tour, and chosen Paris instead. France, belonging to the Schengen area,
with another 25 European countries, offers easy and relatively cheap
visa procedures to the 1.4 million Chinese visitors who flock to Paris.
These new visitors have become a regular fixture on the Left Bank.
Every day, Parisians crossing the river Seine near Notre Dame can see
Chinese brides in full Chantilly lace gowns, being photographed for
what will undoubtedly become highly coveted photo albums back home.
Parisians may bemoan the never-ending onslaught of tourists with new
expressions: “Paris is becoming like Venice! Mass tourism is the new
barbarism!”, but the Paris mayor is laughing all the way to the bank.
This surely must make Boris weep at night.