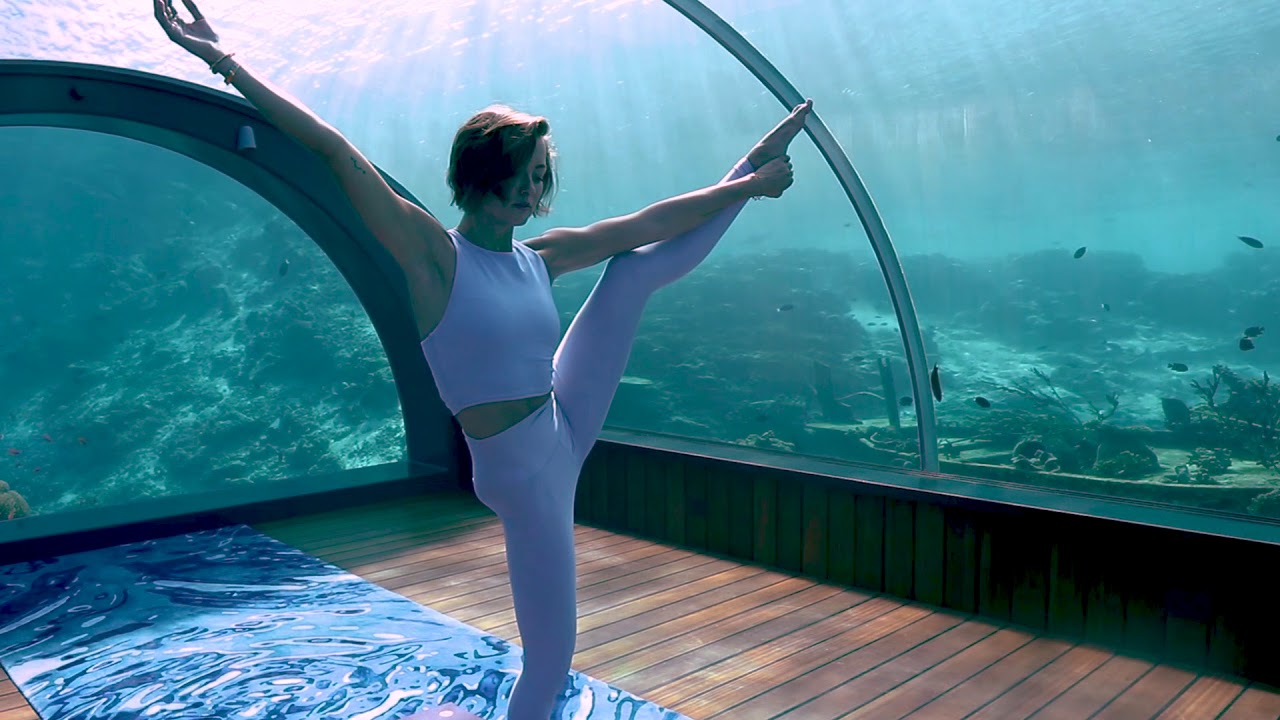 Hurawalhi
Maldives, one of the most prominent luxury hotel resorts in Maldives has
decided to host the first ever underwater yoga worldwide. This is such
that a good opportunity could be provided for the guests and to let them
yield the health and benefits of Yoga in the richness of the underwater
beauty of Maldives.

Set in the Lhaviyani Atoll, notably one of the Maldives’ most bio-diverse areas, Hurawalhi Island Resort
is setting new standards for an ‘outdoor’ practice and becoming one
with nature. For the first time, Hurawalhi͛’s 5.8 restaurant – the
world’s largest, all-glass undersea restaurant, will be converted in to a
yoga studio like no other.

Hurawalhi’s special underwater yoga experience will be led by Jessica Olie, fitness expert and author of #LetsStartYoga. The captivating views of tropical fish around you as you move from one pose to the next will bring you even closer to a zen-like state of mind. Jessica promises this Vinyasa flow practice will provide physical and mental rewards, only found under the sea.

During the one-hour vinyasa flow class, yoga instructor Jessica Olie
will lead participants in a unique session performing downward dogs and,
perhaps, the fish or dolphin pose, surrounded by schools of colourful,
tropical fish swimming in a liquid azure sky.

According to Jessica, “the most beautiful part of the practice is that you take what you need from it, and it gives you what you need.”

The goal of the vinyasa flow class will be to “improve flexibility, boost muscle strength, power up the immune system and produce an inner calm.”

The aquarium-like conditions of Hurawalhi Island’s surrounding
crystal-clear waters, is home to over 2,000 species of sea life
including – turtles, dolphins, the majestic manta ray and reef sharks,
as well as more than 200 species of coral, the area surrounding
Hurawalhi is actually known locally as “The Aquarium”.

Above water, guests can continue tapping into their state of zen at Hurawalhi’s organic Duniye Spa.
‘Duniye’ which means ‘universe’ represents the spa’s philosophy: a
universal approach to wellness, with treatments and retreats inspired by
ancient and modern cultures from around the globe. The spa villa sits
over the ocean, offering a feeling of total immersion into serenity and
nature. The spa is strongly influenced by the many healing traditions of
Asia and Africa, complemented by The HealingEarth product line which elevates the senses in both solo and couple treatments.

Just a 40-minute seaplane flight from Male, guests can stay in one of
90 Villas including 60 Ocean Villas and 30 Beach Villas. The Villas are
stylishly and beautifully conceived featuring soothing décor, sumptuous
linens on king size beds, bleached wooden floors, and private terraces
with panoramic views.

The one hour session will
cost around 120 US dollars per person. The sessions will be conducted by
Jessica Olie on the 17th of this month. Jessica says that
the best of it would be taking what you mostly need from it. She
additionally promises that the 60 minute session would provide mental
and physical awards. Surely, the picture perfect scenery of the
underwater life would facilitate the above.

Hurawalhi Resort is a five star resort which was officially
inaugurated by January 2018. You could reach the island resort via a
scenic seaplane ride which would take around 40 minutes.  The resort
offers 90 chic villas out of which 60 are ocean villas and the others
are beach villas.

Hurawalhi Resort has also become of one of the most popular honeymoon destinations in Maldives.