Since
their settlement in prehistoric times on the land now known as the
Korean Peninsula, the Korean people have developed a wealth of unique
cultural traditions related to the way they dress, eat, and behave at
home. These traditions reflect the natural environment of their
homeland, a terrain predominately covered by hills and mountains, bound
by the sea on three sides and marked by four distinct seasons.

The Korean people learned to use various fabrics, such as sambe (hemp), mosi
(ramie), cotton and silk to make a range of clothing that was not only
attractive but also provided them with effective protection even during
the harshest winters and the hottest summers. They made warm winter
clothes using the technique of filling soft cotton between two layers of
material, silk or cotton fabric, and sewing them together with fine
stitching, and produced cool summer clothes with hemp and ramie. These
clothes typically feature graceful lines and forms that create the
serene aura characteristic of the traditional Korean clothes we know as hanbok.

Korea’s indigenous clothing, hanbok, has maintained its basic components
throughout Korea’s 5,000-year history, while its styles and forms have evolved
in various ways based on the lifestyle, social conditions, and aesthetic taste
of the times.

History reveals that Korean people in the past
tended to prefer simple, white clothes to clothing decorated with
different colors and designs. That is why they were often referred to as
“the white-clad people” among their neighbors who admired them for
being a peaceful people. Nonetheless, Korea has also had a long
tradition of enjoying colorful clothes with complex designs depending on
the period and the wearer’s social status.

Today, Korea is home
to many talented fashion designers who have earned an international
reputation with their creative designs which combine traditional Korean
designs and patterns with a modern artistic sensibility. The beauty of
traditional Korean clothes has been introduced to, and praised in, many
parts of the world thanks to the remarkable success in recent years of
many Korean films and TV dramas including Dae Jang Geum.

Korean
people today seem to prefer clothes inspired by modern Western styles to
their traditional clothes, although some people still insist on wearing
the latter on traditional holidays or for special family occasions such
as weddings. Their love of tradition and yearning for the new sometimes
led to the creation of attractive “modernized hanbok.”

Now
a household name across the world thanks to “Gangnam Style,” a K-Pop
song that shook the world in 2012, Gangnam-gu in Seoul is a large
district where wealthy residential areas sit alongside high-end art
facilities and Korea’s busiest fashion streets. The district now
attracts numerous fashion-minded tourists from across East Asia and
beyond with annual fashion festivals comprising international fashion
shows and contests participated in by many rising designers.

Another
fashion district in Seoul that enjoys an international reputation is
Dongdaemun-gu, which has grown into a hub of the regional fashion
industry, providing creative, affordable fashion items for youth and the
young at heart. With its fully developed distribution and sales
network, highly efficient production facilities, and throng of talented,
aspiring designers, the district is now one of Seoul’s most popular
attractions among foreign tourists.

Hanbok, the traditional clothing of Koreans

“Hanbok” (also called “joseonot”) is a
collective term for traditional Korean clothing. Though there have been
slight changes in hanbok over time in terms of material, preferred
colors, and the length of the skirt or jacket, the hanbok’s basic format
has more or less remained the same for the past 1,600 years.
Hanbok can be classified into ceremonial and
everyday dress, each of which can be further classified by gender, age
and season. All types of hanbok are created beautifully through
combinations of straight and slightly curved lines. Women’s hanbok in
particular are recognized worldwide for the simple yet delightful
harmony of their short jackets and full skirts. The jacket, which is put
on one arm at a time, makes the upper body look very small, while the
skirt worn wrapped around the waist makes the lower body look full,
creating an attractive balance. The cut and drape of the clothing
complements not only the Korean female physique but also flatters and
fits most other body types as well.

The eight beauties of hanbok

The beauty of hanbok is found in the elegant
flow of its lines and in its pleasing color palette. Just like the
gently sloping eaves of a traditional Korean house, the harmony of the
curved baerae (bottom line of the jacket’s sleeves) with the sharp
straight lines of the dongjeong (creased white lining of the jacket’s
collar) well reveals the subtlety and exquisiteness of traditional
Korean aesthetics. The hanbok’s attractiveness even shines through in
the lovely lines created by the body’s movement while wearing it—one of
the reasons it enjoys such global attention. The hanbok is typically
defined as having “eight beauties,” as described below.

The women’s hanbok, with its short
jacket (Jeogori) paired with a full skirt, possesses a simple structural
beauty and rhythmic flow that complement the body’s movements.

The hanbok radiates a natural physical beauty in its
attractive silhouette and lines, which allow for unrestrained movement
of the body.

In contrast to Western clothing, which achieves
dimensionality through straight-lined fabric and stitching techniques,
hanbok is made with flat fabric in a linear shape that only achieves
dimensionality when it is worn on the body. When placed on the human
frame, the hanbok takes on a life of its own—one that is natural,
elegant and flowing.

4. Beauty of harmony
The hanbok features straight and curved lines, giving it
an attractive flow representative of a uniquely Korean aesthetic. The
graceful, harmonious movement that happens when the hanbok is actually
worn is praised the world over.
5. Beauty of color
Hanbok colors are decided according to the “five colors
theory” (“obangsaek” in Korean), which refers to the theory of yin and
yang and the five elements. The hanbok commonly makes striking use of
naturally-occurring colors.
6. Beauty of nature
The curved line, one of the hanbok’s most eye-catching
features found in its full and loose shape, rhythm, and irregular
proportions when worn, has a natural angle devoid of artificiality that
creates a free-flowing effect and brings out the texture of the natural,
hand-woven fabric.
7. Beauty of empty space
Some aspects of the hanbok design are left intentionally
“empty,” to be filled by the wearer uniquely, giving the hanbok a depth
not commonly seen in clothing.

The full shape of the hanbok emphasizes the wearer’s
authority and dignity. While this may have been impractical, it was
nevertheless a feature that made hanbok a reflection of social status
and propriety. The simple harmony of the color palette created by
limiting the number of bright colors used places greater weight on the
wearer’s character over the hanbok’s decoration.

Certain hanbok designs represented the social ranking of
the wearer. The king, for example, was represented by the dragon and
the queen by the phoenix. Tiger designs were used to represent military
officials and were commonly placed on the shoulders, fronts and backs of
their court robes. Civil officials were represented by the crane, an
animal believed to be pure and resilient. 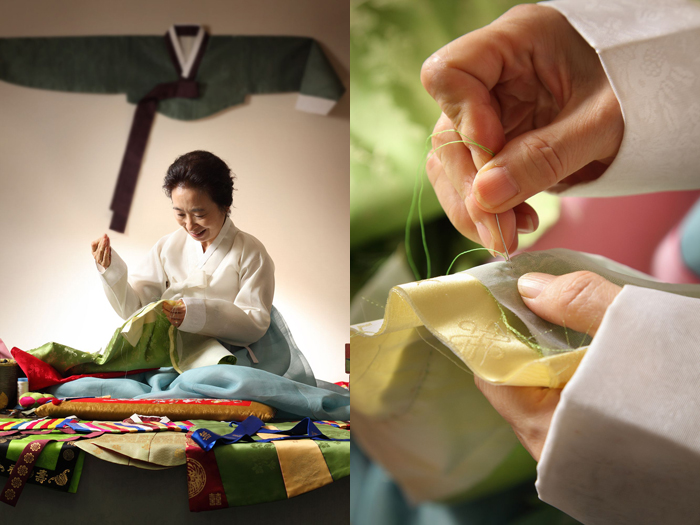 Hanbok, the most “Korean” dress code

Having coexisted with the Korean people ever
since the beginning of their history, hanbok is a beautiful cultural
heritage that all Koreans should be proud of not only for its historical
value but also for its uniquely Korean artistic significance. The
hanbok, which changes only slightly according to the season, social
status and situational context, is highly regarded for its creative
design and overall elegance.
Although the hanbok to some extent lost its
place in Korean daily life due to the rapid inflow of Western
civilization after Korea’s opening to the Western world in the 19th
century, it is still the most representative of Korean dress and a
symbol of the identity of the Korean people.
Korean traditional clothing – the history of Hanbok in Korea and its modern usage. Hanbok patterns including wedding culture.
(credit :  Photos courtesy of Korea Tourism Organization and Cultural Heritage Administration of Korea )
Free Download WordPress Themes
Free Download WordPress Themes
Download WordPress Themes
Download Best WordPress Themes Free Download
free online course
download samsung firmware
Download Premium WordPress Themes Free
udemy free download
Share